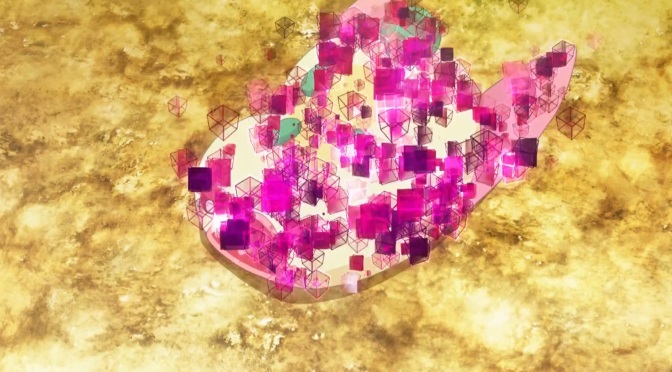 We’re back to the big Fourth Event where the Guilds, no matter how big or small, are going after each others Orbs. We’ve seen some of the big Guilds, we’ve seen how Maple Tree is working through it but can they break into the top 10?

I really liked the balance this episode had if I’m honest.

It let us see the others fight and whilst Sally needed rescuing and May and Yui are defeated none of them come over as weak.

They made it very clear leading up to Frederica’s ambush on Sally that she had worked too hard and pushed herself too far and was tired so needing to be “saved” wasn’t that bad. In fact she still managed to fight off a whole bunch of the ambush for a long period of time to be saved in the first place, it showed how bad ass Sally was but also how adept she is and how she can look after herself.

Maybe just not against the amount of people Frederica had.

Then when it comes to May and Yui they were defeated by Dread who is one of the top players in the game, they were able to stagger him and put him off balance which in itself is a giant feat but ultimately were defeated.

Again though their defeat wasn’t the important part, the fact they were able to hold off one of the best players long enough for Maple to return and defend the base was what was important and it kind of made up a little bit for the totally over powered Maple who was flying around the place using the various stupid abilities that she has already acquired to help the Guild break into the top 10.

That being said though the biggest help to that goal came from Sally and even to a point Kanade.

Even in the end when they send Maple out the only reason she can do what she does in the way that she does it is because whilst throwing her all into it Sally had managed to not only map out the entire area but plan a route around it to maximise the amount of Orbs that Maple, Yui and May will be able to obtain.

There were some really interesting fights in the episode, most of the characters got to show off their own over powered skills and beat fights that put them to some sort of limit whilst still giving Maple the attention she kind of deserves for being the leader of the group. It is nice that we didn’t just have Maple win everything on her own and the skills, abilities and set ups of the other characters also came into use.

That being said we now are looking at the fight between Maple and Mii of the Fire Nation.

Now that will be a interesting fight.