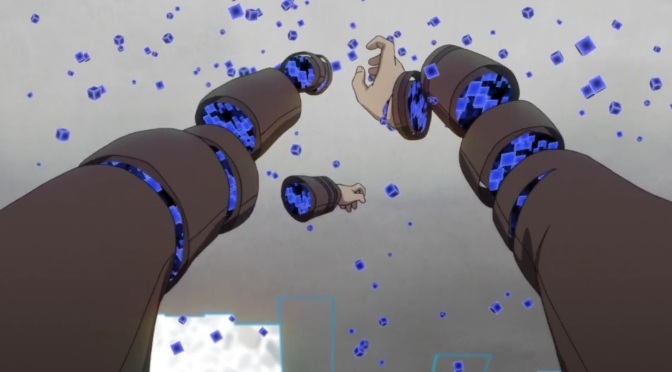 After a infuriating end to the last episode we actually get to have a look in the ID Well of one Kiki Asukai. What will Narihisago find when he enters it? We finally get to know!

I am so lost on this episode.

Narihisago wakes up the day his daughter dies. He still has all the knowledge and information that he came into the ID Well with, he knows that he’s a Brilliant Detective and everything about the Challenger, but he’s just there in the past with his wife and kid alive and well.

Now that I guess isn’t so confusing I guess? ID Wells come in all shapes and sizes and whilst it might be weird that he was transported to his own world view point you could have made a argument that it isn’t weird seeing that his and Kiki’s life were tied by this event. Kind of? Maybe? Not really but I guess what I mean is that ID Well’s don’t make much sense so you could have come up with a explanation.

Just he keeps on living in this world.

He changes it by beating up the Challenger and killing him before he could kill his daughter and saving Kiki Asukai with Momoki himself. As he hasn’t been driven crazy and gone on a murdering spree which I can only imagine is why he was in prison before he was able to meet and talk to Kiki and this is where it really got confusing.

I do not really know what is going on.

Apparently in Kiki Asukai’s dreams the Serial Killers show up and murder her. Night after night. John Walker was the first one and then he invited others to come join him. As the Challenger liked physical violence not only as the perpetrator but in return he kidnapped Kiki to not only abuse her in his dreams but have her fight back in reality.

Now this is all so over my head at this point. Whilst it is fascinating and I can’t deny that and it adds a really cool layer, and hundreds more questions, it is also starting to get super convoluted.

How is this helping? Is this real? If it is real then how is it real?

It is getting to that really strange Inception point.

We no longer really know what layer of reality we are in. We THINK we’re two layers down but in reality we don’t even know how they truly enter ID Well’s, what a ID Well is or how you can even enter another ID Well within a ID Well.

I always thought they jumped into intentions more then dreams. Maybe that isn’t the right word to use but they entered the psyche of the Killer, seeing how they see the world and picking apart vital clues to find them. So if Kiki’s story is true in real life as well then that means John Walker doesn’t just know how to enter a ID Well which apparently is more of a emotional connection to the Killer but also enter their dreams too.

We end the episode with Narihisago back to where he was.

Killing people via talking them into suicide in a attempt to help Kiki, who by the way is Kaeru, the dead body he always sees because…. The Killers kill her in her dreams.

I don’t really know what is going on, is there some semblance of truth to all this? Did Narihisago start talking people into killing themselves over something like this or did he just go crazy?

No matter how much they try and explain things in this show you end up with a million more questions.