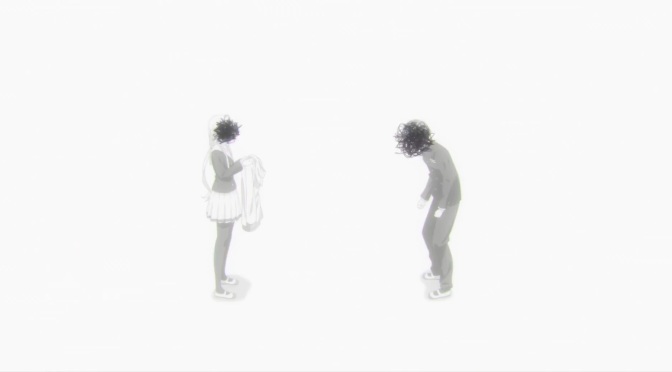 Worlds collide and they won’t stop clashing and dreams won’t stop being impossible until all these characters prove all the adults who have been jaded wrong.

I think she’s a fantastic character with a sad story and some really wonderful moments.

She is in fact the complete opposite of Chiyuki and whilst her presence in Chiyuki’s life shone a light on some of Chiyuki’s problems it also highlighted other areas where that character suffers.

Biggest weak point is that she isn’t really that much of a character.

She has this need to be a model in Paris, she’s too small but then she sways from being a bitch, being cold to being a lovely character or relatable or even cute.

Kokoro is torn between what she’s “good” at and what she wants to do. She puts her heart and soul into what she wants to do just like Chiyuki and Tsumura but she’s kind of forced due to not being strong enough to stand her ground to do something she doesn’t want to do.

Her being in this show ultimately makes Chiyuki even more unlikable as a character.

Even this episode she was kind of meant to show Chiyuki that she can’t really judge people based on her own life, her own dreams and her own standards. She gets angry that Kokoro’s hands are all cut up when she should be prepared for a photo shoot being the lead model and then later learns that Kokoro doesn’t want to be a model at all but a fashion designer and yet there is never that moment where we see Chiyuki really learn that lesson or interact with Kokoro in any other way knowing the truth of the situation.

Whereas Tsumura kind of fails sometimes by being TOO passionate about EVERYTHING.

He has his dream but he’s determined to help others with theirs. That makes him a much more meaningful character and I enjoy episodes about him much more then about Chiyuki as I say every week but the addition of Kokoru has made Chiyuki totally unbearable to watch now.

Her part of this episode was really the only part that mattered as well.

Sure after the photo shoot, after seeing how people will just throw her to the side for being short and even seeing her and Kokoru’s mentors talk it out we did get some Tsumura time but it very much was aimed at him helping Kokoru find the courage and ability to carry on after falling foul of their employer once more and being too stuck in her head about the second part of the competition.

Which she passes which makes me happy, doesn’t make me happy we didn’t get to see her actually make anything though.

It wasn’t a bad episode but the longer it goes on the longer I realise that it really just isn’t for me.

Some characters are characters I enjoy spending time with and some stories, like the post-credit scene of Tsumura’s mum being rushed away in a emergency because as I said the other week it looks like she might die soon, but the actual setting and having to remember that whilst I want Chiyuki to be more then a stereotype the point of her character is that she’s trying to force that stereotype to be accepted I just can’t enjoy it.

I don’t care for fashion.

I don’t get the attitude that a pretty girl isn’t good enough if she’s short.

I don’t get why I should care when I know her dream comes true.

I kind of now like the switch in the first episode but wish it was a permanent switch and Chiyuki became basically nothing to this series anymore and we watched as Tsumura tried to find his place in the world.

Not going to stop watching but it is apparent that I just don’t get it very well. Which is fine.