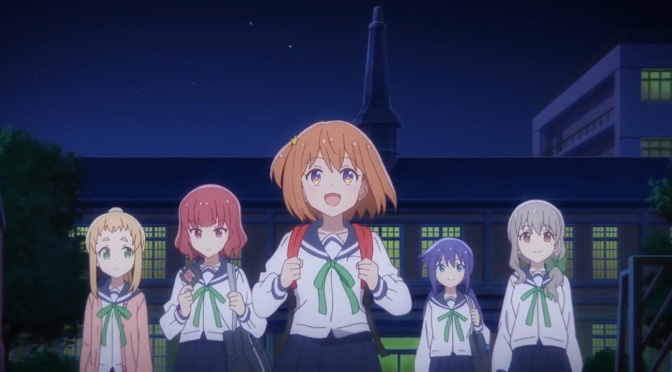 After coming up with a theme and some decent sounding plans for the Festival it is time to see the preparations as well as how well it goes for the girls!

So much of this episode just had me nearly in tears.

For a start seeing Mikage come to terms with the fact that people will be interested in things she likes as long as she can explain them in a interesting way was nice. I mean that isn’t what she realised but it came over as her being very closed off after the last Festival where they had a informative display and no one cared.

Getting help from the sports club and having people actually get interested in things that she was interested in seemed to show her that what she loves isn’t all that hard to interest people with you just have to find a way of getting their attention.

With that I personally think she’d make a good teacher.

This was quite a slow episode really, the preparations were fun to watch specially on the Geology’s side but it wasn’t anything great, it was nice to get a bit of information on why Monroe wants to be a astronaut but overall it was kind of mundane stuff that didn’t cover much new ground.

As for the Festival I love that we got to see their families show up and support them, it was extremely nice to see Ao’s mum show up and voice the fact that she never really talks about herself so it was nice seeing what she was doing and the families themselves being just nice to each other realising that these are the people at times looking after their kids.

So whilst it wasn’t the most exciting of episodes it was also a really nice chill episode that ended with a bombshell but overall just kind of brought the two sides together and showed how far they had come.