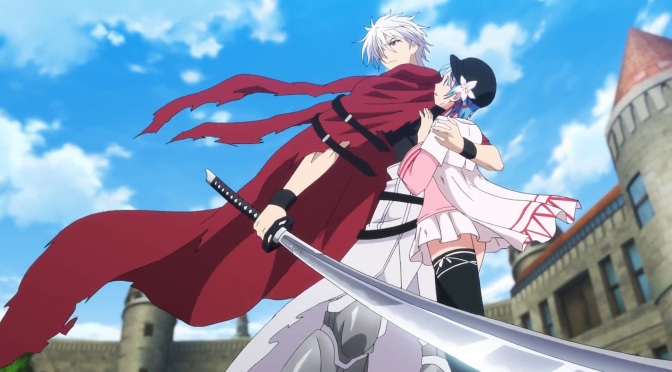 Will Lynn ever catch Licht and sort out her embarrassing uniform? We will find out.

What even is this show?

I am starting to really appreciate how Plunderer can change from one tone to another almost instantly without missing a beat or making anything look bad.

One minute Licht is being chased by Lynn and the rest of the village the next he’s in a serious battle with pretty unserious music behind it with Jail. Each part of the episode comes naturally after the next without it feeling jarring and it just kind of works. Really well. To the point that I actually really get into whatever it is going on at the time and can kind of forget what the tone of whatever was happening previously was.

It is like watching a few different genres in one when you aren’t.

Sometimes it can be heart breaking, others heart warming. Sometimes the show is ridiculous and other times it is intriguing.

One thing is for sure it is never at a loss on making you feel something.

I like Jail. He might be the bad guy in our eyes but he actually comes over as being a very strong willed character doing what he believes is right. There is a contradiction in what they are fighting against and what they are and he is a liar knowing that his count will effect his job so he hides it to stay out in the field but all this does is make him super interesting.

The fight with Licht so far has been really impressive and with it not having the emotional impact as the one he had to save Hina we’ve been able to enjoy watching them fight more, plus it is the first time he is kind of evenly matched.

My favourite part of the episode though was still every bit with Lynn and Pele in it.

As a duo they work so well but they are also a good opposite to people like Jail and the guys in the first episode in that they really do look like they just want to do what is right for everyone. Lynn especially is just a nice person and wants what is best for the people under her care, you can’t help but love her enthusiasm as she tries to get people to help out.

What I guess felt unneeded is the bits with Hina and Nana. I get that it will probably be better this way with snippets of their journey to get to Licht and help him but at the same time I just like spending time with the others more.

Really want to see the end of this fight.