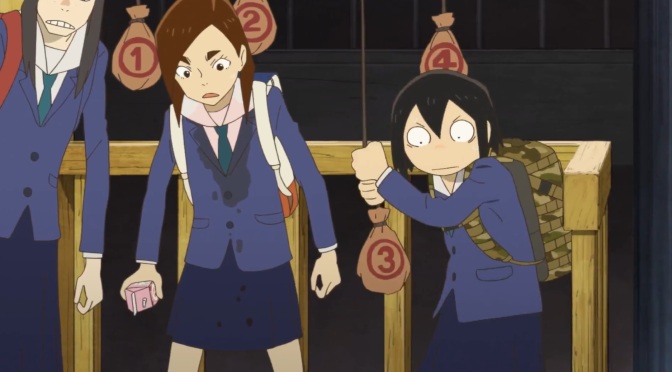 Kanamori has her hands full trying to keep Asakusa and Mizusaki focused on the job at hand. That job being to finish their project in time for the student council committee to see if they get funding.

There were two things I loved so much about this episode.

Well there were lots of things but two things in particular.

First up was seeing Kanamori basically manage the two unruly dreamers as they stopped making their deadlines and started to look like they were going to never finish in time.

Both Asakusa and Mizusaki don’t really think about the money side of things or even just the fact that as a group their project can be pulled at any given time if teachers or indeed the student council decide to revoke their permission to be a club. Kanamori brought them time with a nonsensical argument but they need to get the funding.

Neither of them really care about that though and are so caught up on doing things right that Kanamori has to basically fight them into submission on a number of things to get a rough preview of their idea out on time.

Why I love it so much is because it gave the group structure.

It stopped Kanamori just being a body there for the sake of it and gave the group a leader. Dreamers don’t always make the best leaders, they have something in their head they want to do but deadlines just don’t come up in their mind. It is fine wanting to do it your own way but it was so important to get SOMETHING done to a high enough standard that they could continue to be a club altogether and giving Kanamori that position makes so much sense.

Another reason is it showed that deep down Kanamori cared.

This is her club as well, she was working just as hard even if she can’t do the drawings herself. She coloured it and was coming up with ways to make sure that they got done in time. She stopped just being this intimidating figure, which to be fair she hasn’t been since the first episode really, and actually got to be part of the group properly.

The second thing I loved was actually getting to experience what they had created.

It wasn’t in the usual rough hand drawn style their dreams are in, it was a proper animated adventure. Of course they hadn’t had time to complete it but it was nice to see not only the anime itself being shown but how the work they did was so magical that it drew everyone in the room into it.

They won their budget fair and square and now have the ability to work on finishing this project.

There were other parts of the show that were just as great.

Watching how they all worked so hard was amazing, I like how they didn’t just show them day dreaming but the hard work that was put into what they were doing. In some ways it showed all the things that go into making things like this which was super interesting.

Plus the actual budget committee was ridiculously hilarious.

Loved Kanamori going up against the student council.

Once more for a show that I just picked up to procrastinate this has turned out to be one of my favourites of the season.