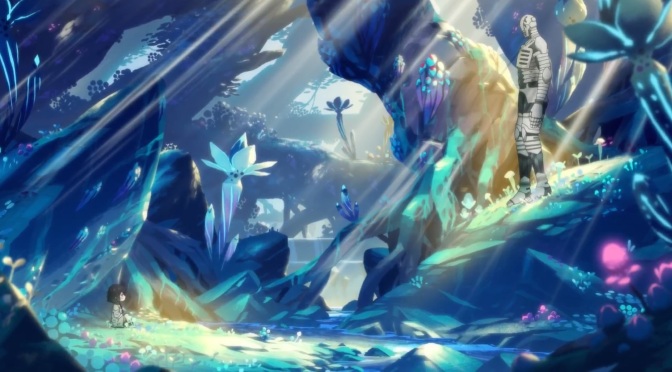 The cutest father and daughter show you will ever watch as Golem continues his journey with Somali to find her parents.

Sadly… I think her parents might have been eaten.

I mean that has nothing to do with this episode but last episode heavily implied that they were eaten by Monsters seeing she was found in the woods with a chain around her neck, indicating she was a slave, and a bunch of slaves had been eaten recently.

This episode, as the first, kind of didn’t actually touch anything horrible like that. It wasn’t even mentioned in this one as the duo stay in the woods and meet Oni instead who live out there close to the herbs that Shizuno, the Dwarf Oni, turns into medicine whilst his suffering assistant, Yabashira, stays at home cooking amazing sweet stuff.

It was as adorable as the first but also heart breaking in some ways.

We got to learn more about Golem. It is obvious that regardless of his ability to feel pain or emotion he very much, at this point, is being effected in a very human way by Somali. He was heartbroken in fact when she got hurt and was in pain. His need to get her home to her parents isn’t just because he’s doing the right thing but because he only has a year and just over 100 days until he ceases to exist.

Of course we still get the very robotic way of thinking about things but we’re seeing how he is evolving in some ways.

As well as slowly crumbling away into nothing in other ways.

Which makes the fact that Somali might not have parents and might never find a safe space to live even more tragic.

This show does a good job of making you forget that though. You kind of lose yourself to the here and now and how sweet that story is that everything else doesn’t really matter. Like you look back at the end of the episode and put two and two together and feel sad but during the episode not only the sweet story but the beautiful environment they are in and the likeable and wholesome characters you meet just make you forget that this story might end in tears.

I mean are we ready for a sad ending because I think there might be one?

Personally I loved Shizuno and Yabashira and I kind of hope they show up again. They know the Golem is falling apart and has just over that year to live and they were just lovely characters. I think this might be the one thing that upsets me most other then the story is that the way it is we’ll meet so many people along the path to where this show ends up we’ll have to leave ones that I truly love, even in such a short space, and maybe never see them again and that is very upsetting.

Hopefully they will be back sometime.

One thought on “Somai and the Forest Spirit : Edible Herbs and the Oni’s Dwelling”