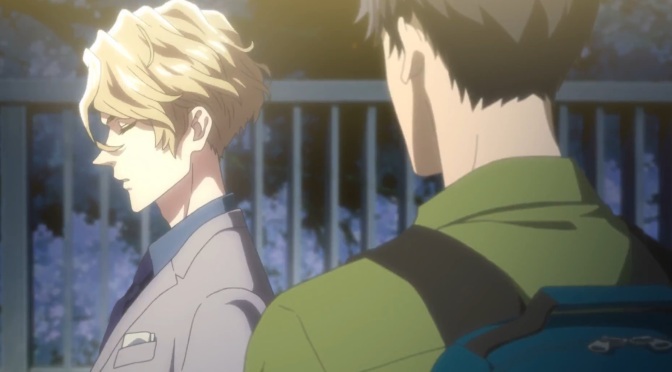 Another lesson in Gems as well as stories of humans and everything else. As the random pick for the month I was amazed by how much I loved the first episode but can it keep it up going forward?

As I said it is a story of humans.

Whilst the gems bring people to Richard and Seigi it is ultimately their stories that are going to matter and those stories don’t have to be about stolen gems or anything so dramatic.

Sometimes it can even just not be about the gems at all.

This was the story of Mami. Someone who because of who she is tried to hide herself from society by being someone she isn’t. Or more simply she was a lesbian who was marrying a man to have a easy and quiet life. Where the gem came in didn’t matter because she knew in her heart that she couldn’t do what she was doing to a man who loved her so much.

It was, as Seigi’s grandmothers, a sad story to tell.

Of course it isn’t ground breaking and Mami is just a passing customer we’ll never see again but it is a story that is still happening all over the world and it was so well written and beautiful portrayed that even though you might believe people have the right to love who they want and sometimes forget that even in this day and age people have to hide themselves you were instantly reminded of how hard some people have life by being told they can’t be who they want to be.

Both Mami and Homaru were nice characters, it wasn’t even like Homaru was a bad guy he just wasn’t the person Mami wanted or needed to be with.

It was also nice that both Richard and Seigi have their roles in this as well.

Richard knows a whole bunch about gems and people but he doesn’t seem the type that would butt into someone else’s life which is I guess why Seigi is there because he has this need to fight for people even if he doesn’t know them.

Seigi learns a lot by being with Richard and in turn that helps him help other people.

It is a nice relationship.

The entire episode was also broken up by Seigi learning how to make a cup of tea properly which was a interesting thing to have in the background and broke the tension quite often.