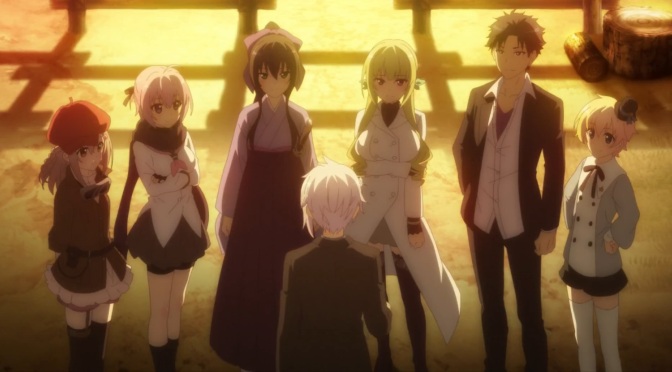 Well this episode went really dark really fast and also kind of gave us confirmation that Keine isn’t really someone we should be in support of.

I will give the show this.

Last episode I said that the Keine thing really annoyed and even kind of upset me. This week her behaviour continues to show that she’s actually just not a really nice person and she kind of knows it too. Whilst she might be a genius as a Doctor it has also in some ways jaded her after seeing how weak human bodies can be and how people suffer for no reason she’s made it her aim in life to learn how to perfect the thing that God himself couldn’t perfect.

This also means she knows how to get into someone’s skull with very little problem, change their brain to be obedient and sew them back up and have them on their feet in moments.

Without the use of modern medicine or equipment.

I mean I can’t deny it gives her a bit of a edge but I’m not sure what the point of having one of the Seven Light Fate being basically a Demon. I get why they played the Religion card in the first place but it seems odd to just have one of them be truly evil.

Then again whatever kind of bomb it is that Tsukasa has made Ringo make puts him quite close to Keine to be honest.

They as a group are starting to look less and less like saviours and more and more like the evil that is wrong with this world in general. Sure look at that barbaric things that people in this world do but they are in no means anywhere near as bad as what the Prodigies could do.

That being said Shinobu kind of makes up for it a little bit by coming to Jeanne’s aid as she is about to be raped, yes raped and no not by Keine, and killed for holding onto the belief that people should be treated kindly.

I am not joking.

In that way Tsukasa was totally right, the higher ups in her order are all corrupt and just as bad as Gustave ever was. Not only that but I personally think this new person that has joined them IS Gustave as I don’t know who Shinobu would think he is that should have filled us with dread at the end of the episode.

Honestly this episode in particular was really strange in a good way.

This show has a lot of different faces and it wears them all vert well but this episode in particular went down a path the one where Lyrule was nearly raped went but went deeper. Instead of seeing the evils of this world we kind of got to see the evils of our world creep in and you have to wonder whether it really is worth what the Seven can bring just to advance them along a bit more.

At first I was happy that they seemed to preach equality and harmony and I liked how they seem to have peacefully done much of their work but now there is a possible atomic bomb, a doctor who can literally turn their enemies into allies and we still have the other side attempting to be as bad as the good guys will probably end up being.

I liked it though.

I like that the Heroes aren’t all really Heroes and I liked that they showed that Tsukasa kind of really was serious about taking over and whatnot.

It is just ultimately very scary.