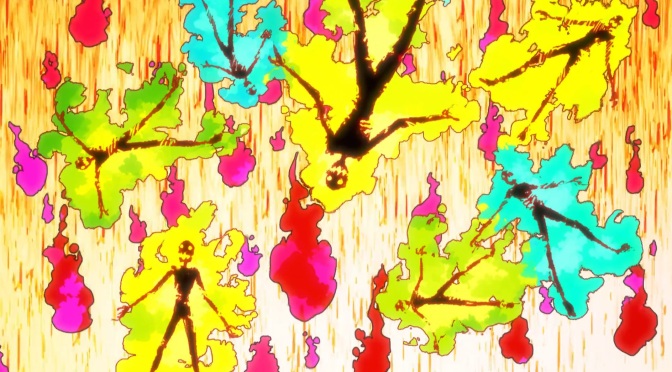 With the team now fully assembled it is time for the 8th to go after the White Clad at last.

Are they ready though?

The answer obviously is no but with strong allies they soon will be as both Shinra and Arthur are sent off to work under Beni to train and Victor appears to give a bit of a push to that too.

Again it is nice seeing all the Companies working together. Seeing the bonds that the 8th have created and that they are truly bonds and not just empty words was good. I mean to be fair I was expecting Hibana to be there anyway but it was nice to see both Karim and Konro at the meeting and getting all the information we know so far condensed down.

Also we kind of learn a little of who Licht is and I have a feeling that I’m a dumbass and we did see Victor with Joker earlier in the season. I just have this image now from one of the earlier episodes of them all hanging about and talking. That being said whose side they are on and what they are really up to I don’t know, Joker some how seems to be involved with Shinra and Sho which made me question what actually happened to their father? Could that be who he is? I mean they don’t have a third brother but I kind of got the feeling that Licht was hinting at something with him and them.

Then again it could just be how strong he is which makes me sad because it makes it feel like someone as strong as Beni might actually be seen as super weak compared to them and I’d like to see Beni be one of the best because Beni is great.

He was in this episode lots being grumpy but having the time of his life and that is all I care for.

They aren’t holding back on making him the creepiest of the creeps in this show, him talking to Konro and having his eyes roll in circles as he basically gets told he’s weird made me laugh so much. I don’t know if he’s a good guy or a bad guy, I don’t think him and Joker are to be trusted but they at least don’t seem to be on the side of the Evangelists which surprises me seeing they seem to have the bugs and use them too.

If they were against Shinra though then why power him up?

Just to take down Sho?

If Sho is so much more powerful though that they need to power Shinra up to defeat him then aren’t they just creating someone even worse for themselves to have to fight in the future?

I don’t think it’ll be long before we learn what is going on though which is what I’m looking forward to most. I want to see how all these groups kind of mesh together because at the moment you have a mix of good guys and bad guys in the Fire Force, the bad guys in the Evangelists and then Joker and his group who are a total mystery.

Then again Beni is the greatest isn’t he? Being able to help Shinra by teaching him old Japanese fighting stuff because he’s in love with his heritage, just how cool is he when he knocks his robe off his shoulder to fight? Honestly best character right there.

One thought on “Fire Force : The Secrets of Pyrokinesis”