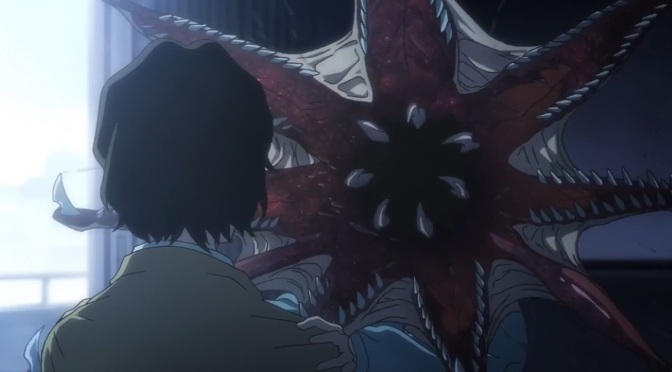 Shinichi has finally put a end to his relationship with Satomi… Maybe.

His humanity seems to be failing him daily and now he has a human who knows who he is and is still tailing him for Reiko.

To be honest I think they missed a beat in this episode.

Pretty sure that this was meant to be the time that we finally see Shinichi break but I don’t really get how we got from one side of the episode to the other.

Plus did I hear him right? Did he say “damn humans” at one point?

I’m not saying it was bad it just seemed to skip a scene that we probably needed, that being said the final break was done in such a brilliant way that it honestly nearly didn’t matter.

This episode saw him trace the private detective back to Reiko and finally come face to face with her again. Now the detective knows his entire truth as well as the truth of the woman that he was working for but it is up in the air what actually happens next.

The reason this review is so late out is because, as you know I was in so much pain, but I struggled more then anything I’ve had to write in the last week to find words to actually explain how I felt about the episode. It really felt like a turning point for the entire show but at the same time, as I keep saying badly, it felt like we missed seeing that turning point.

I kind of guessed that Reiko would be the one that turned him from one thing to the other but I feel like in a way his turn from being human to being this cross between a human and Parasyte hasn’t been handled very well. We’ve seen it but I feel like because we live in his head quite often there needed to be more of him breaking out and questioning what was happening before his humanity seemingly has died.

I’m going to stop trying badly to explain how I feel about this episode because otherwise the review will never come out but as this seems to be the turning point in Shinichi it might also be the turning point from me really enjoying the show to feeling like it jumped the gun. We’ll only see in the next episode I guess!