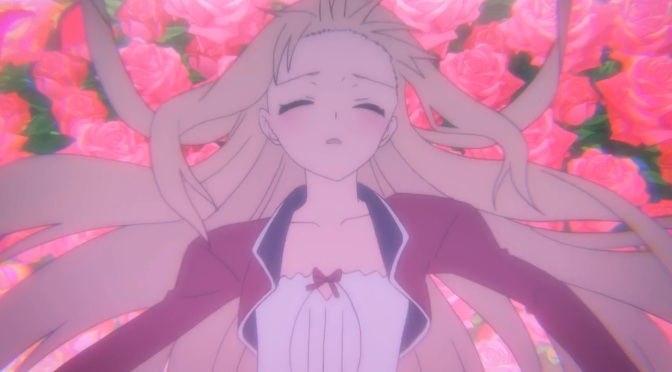 One of the last three shows we’re going to be reviewing is Assassins Pride.

This one seems to be much more up my alley then anything else I’ve had to watch this season so far and I’m happy it was left for me to watch.

It was a very dramatic first episode.

There was a lot of lore that it had to give to us and I feel it did a good enough job telling us about it without feeling like it burdened the episode.

Explaining the world and even the backstory of Melida Angel was done in such a way that you understood what is going on and why it is important but it never dragged or got in the way of decent action scenes or actual character building.

Melida is one of my favourite characters this season already.

She doesn’t seem to know that there is a question in her parentage, her mother apparently having a affair meaning the in the eyes of this society she doesn’t actually deserve the name she has and won’t ever develop Mana, a special skill awakened in those from noble families. She carries on regardless of her own downfalls and works hard to follow her dream.

It is hard to tell if Kufa, the Assassin sent to figure out if she had any Mana in her and if not to Assassinate her, looks down on her or respects her but his inner thoughts were really helpful in building a picture of not only Melida but the world that they both live in.

A world where because she can’t produce Mana she might be Assassinated instead of just left alone to live her life.

I was honestly waiting to find out where the Assassins Pride bit comes in but when I realised that Kufa had been sent to Assassinate her if she didn’t show signs of actually being a noble I wish I hadn’t. Not only that but the ending of the episode was actually pretty upsetting and now leads to the biggest mystery of them all.

How did Kufa wake up her Mana?

He is acting like she’s 100% a bastard child and therefore this is something he needs to keep hidden. But what? Keep hidden that she has power because she’s shown it off now so the cat is out of the bag on that one. Keep that she’s a bastard hidden? How can you prove that if she’s now awakened Mana?

I really don’t understand that part but I’m hoping it is explained in the next episode.

If only nobles can have Mana surely that proves that she is of noble birth right? Like her whole character reminded me of Neville Longbottom in Harry Potter with the family trying to force magic out of him no matter what that meant.

Couldn’t this have just been the event?

Wasn’t it being thrown out a window that did it for Neville so being killed seems like a stress that would awaken any latent power.