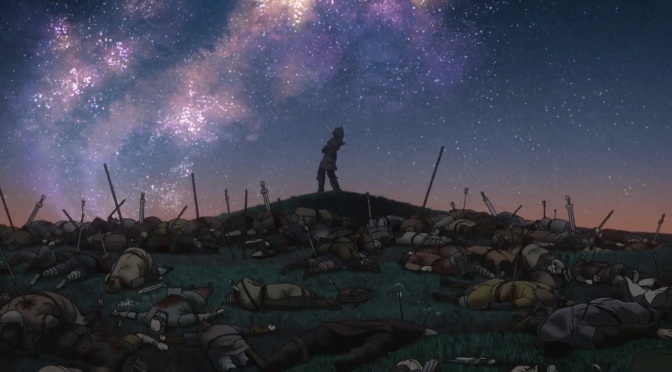 Thorfinn has to be the Hero’s child surely? What is Thorfinn even up to? Babysitting the boring Prince of the Danes.

After a exciting and dramatic looking end to episode 12 though we can but hope this is going to be a much more exciting episode.

Actually it isn’t Thorfinn at all.

I was kind of wrong and kind of right in the last episode. When Askeladd started talking about a Artorius he’s talking about a real living one that was the real human behind the King Arthur Legends and it just so happens that Askeladd is descended from him.

That’s right it is actually Askeladd that the title of this episode refers to but as of yet we haven’t really got to know him a whole lot better.

He has been one of the absolute best parts of the series all series long but this gives him so much more depth. From being a Pirate/Dane that does his own thing to being of a heroic bloodline that was taken by force by a Dane and his mother left dying. It is a interesting tale that doesn’t really need to be explained much further but made one of the best characters of the series even better.

It also left us with a sort of truce between two groups in Wales as they band behind a potential hero in the making to get Canute back to the Danes so that they can hopefully stop any bloodshed in Wales.

It wasn’t a bad episode and I even didn’t mind Canute in it, he finally opened up to Thorfinn who spent most of the episode looking down his nose at him and whilst I guessed that was going to be the way things went it was also a little annoying that it went down that way because it felt a little rushed.

Personally Canute’s reasoning actually made sense and I get why he was being cautious but at the same time it still feels real odd for him to be so anti-Viking in the way he behaves. He is right that he can’t just agree to non-aggression agreements with the Welsh Kingdoms until his father agrees but at the same time him just not speaking makes everything a whole bunch worse..

His relationship with Thorfinn is nothing yet already it is seeing results which might be good but just right now feel like they’ve been put in as early as possible so that instead of slowly having Thorfinn poke him into speaking he can now speak all of a sudden.

Still a great episode and I like that we look to be learning more about Askeladd.