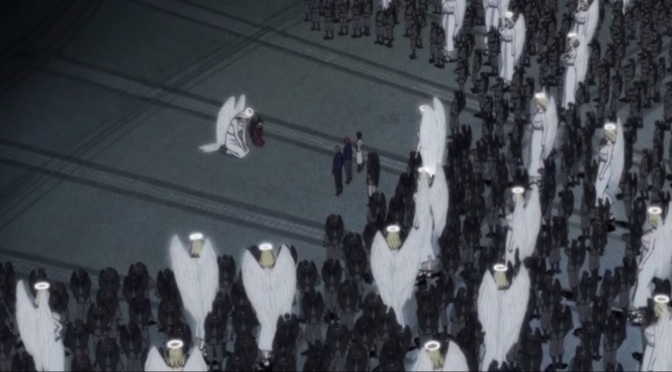 After seeing a differing opinion I guess it is time to see how Miyako takes the news that not everyone trusts him and indeed whether he can see the point of view put forth in front of him.

Or if his co-workers are going to “spoil” him and tell him to ignore what was said.

I honestly think this is a really underrated series if I’m honest, sometimes I wonder why I ever got behind on it because it is so good.

Not only does it build up to something amazing that is probably going to change Satoru’s mind completely but it also didn’t just pander to the Miyako being right answer. It kept the characters humble and even had a moment where their boss pointed out that when people get arrogant they tend to fail.

Which is what kind of happens.

Again the Another in this episode is pretty amazing. She’s some kind of silkworm that has made a bunch of cocoons in the Olympic Stadium possibly for a festival of the Gods. Everything about the cocoons was creepy as hell but we were only ever there with Miyako for Satoru to make a point.

Again he wanted to show Miyako that his abilities was never going to be something useful. That talking to Anothers might be good for some cases but not all and in those cases extreme actions must be taken. Thing is Satoru is wrong on that.

Unlike Miyako and his ward he doesn’t seem to care for anything Another related.

If he had he might have come to the same conclusions that Kyoichi and Theo did which was that it was for this festival and the cocoons should just be left alone. Of course Satoru neither wants to close down the stadium, move the cocoons elsewhere or even figure out what is going on so he has a team try and burn the cocoons and rid them of this disaster waiting to happen.

Unfortunately it turns into a disaster for them because as Senda said arrogance leads to a fall.

We’ll have to see how this is settled in the next episode but I guess it’ll be either a eyes opening moment for Satoru or Miyako or maybe just a understanding that both their points of views are valid but the answer lies somewhere in between.

Somewhere along the lines of where Kyoichi stands.

I say this because he actually doesn’t agree with Miyako or Satoru. He tells Miyako in this episode that he thinks that Satoru was wrong in how he dealt with the Dream Demon but at the same time the Ears of Sand has made Miyako over sympathetic to Anothers. Whilst his personal problems with Azazel mean that Kyoichi can’t see why Azazel might be a sympathetic character, and for good reason, it along with Satoru’s point on him being friends with Kohaku are proof that whilst at this point in time Miyako’s way of doing things might have been OK it isn’t always going to be that way.

For me I think that was a important and pretty brilliant way to go.

I did think that maybe his colleagues would side with him and be horrified by Satoru but seeing them kind of agree on a middle path with Miyako and Satoru being the two extremes was a nice change of pace for just about any show and I feel like the answer does lie in the middle.

You need to understand the Anothers and now you can communicate with them but just like humans, and you really do need to think of them like humans, they are complicated. Some will lie and some will be honest, some are looking for things and will put humans in danger others just seem dangerous but are also oblivious to the danger they are seemingly putting into the world.

They are a mixed bunch and at some point the Ears of Sand aren’t going to be enough to save the world but at the same time killing for the sake of killing makes you no better then the Anothers you believe you are killing for the betterment of mankind.

In fact it makes you worse because sometimes you are killing innocent beings that are just misunderstood.

It was also nice that we got to see just where the hatred for Anothers stems from in Miyako. Like I thought there is obviously trauma from a time that his uncle was looking after that girl Another that his cousin is now looking after and even just the things that have happened in this series without context will affirm his beliefs.

I don’t think Miyako saving him will be enough to change his mind though that is seemingly where this is heading, that might be the one weak point of the story, but I can understand why they’d put this fight of opinion as the main end game story for the series. Kind of hoping that he doesn’t change his mind but I’m not going to be mad or anything if it does.