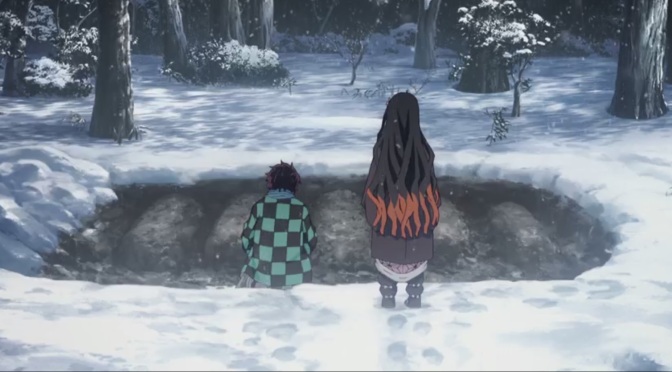 We are still trapped in the Demon house just now that Kyogai is in full battle mode the house is going crazy with everyone now feeling the effects.

Before I go on I don’t really get the eldest son thing.

Or I do but I have a feeling that this should have come earlier. I don’t really want to always have a thing that Tanjiro has to overcome. We get that he’s injured, we get his job is dangerous and scary and we now have a member of his group that does the scared thing perfectly so why do we need to be reminded he’s the eldest son therefore endures?

We had the fight which was short and more the ending of the life of Kyogai, he had his own sad story and once more Tanjiro didn’t just end the life of a Demon but the suffering of a human that did nothing to deserve their fate. Kyogai is probably so far my favourite Demon we’ve encountered just because it looked amazing and was also pretty cool. Whilst the fight didn’t last long it was hard to watch him cry as he disappeared because someone had finally acknowledged him and his talents.

This episode though wasn’t really about that.

It was about seeing another side to Zenitsu.

Him and Hashibira obviously left the house before Tanjiro and both know in the box is a Demon. Whilst Hashibira who doesn’t know Tanjiro and has no interest in anything but his job, because he is a Demon Slayer, Zenitsu protected the box with his life even though he knew there was a Demon in there because Tanjiro said that the box meant more to him then his own life.

Not something I thought I would be seeing from Zenitsu.

How these all end up together I don’t know but that was hard to watch and made it more interesting to get to know Zenitsu who isn’t just a wimp that goes unconscious and OP but has a heart and a moral compass and believes in things and will put his life on the line for those things.

Who the hell would have thought that after the last two episodes where he just walked about screaming and crying all the time?