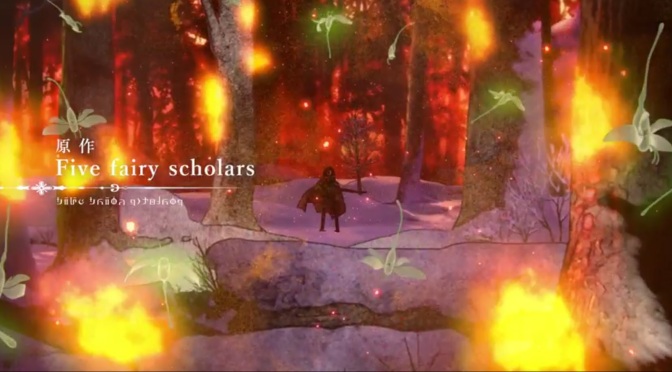 In what I’m guessing is the final episode of this half of the season, the other half coming in October I believe, we see the war come to a end.

Probably the best episode of the season so far. I know it feels like a end to the season because it is being split but if the show calms the hell down and focuses on stories like this in the future I can see the second half being much better than the first has been and the first hasn’t been bad it has just been crowded and difficult to keep up with at times.

Without going into too much detail about the episode which was basically just Dorothea trying to keep the palace safe from Liscar whilst Liscar needed to keep them away from the King I guess we have to talk about the two big points.

First up the battle between Liscar and Free.

Liscar is one of the Seven Knights and he’s bloody cool as hell whilst Free was just a solider who so happened to be bequeathed a Fairy Weapon by I’m guessing his trainer Jet, or at least that is what I’m getting from the small flash backs that we keep seeing from Free. Both of them are super cool and their battle was actually one of the best in the entire season, let us not forget there have been a lot of battles.

Whilst there was no winners I like the fact that this battle was there more of a lesson for a character like Marlya that sometimes just keeping the castle safe, sometimes just beating the enemy back enough that there is no more fighting is a win in itself and that we shouldn’t be out for revenge but living in the now.

Plus Free is super cool.

Then there is Ray Dawn.

Liscar was just there to keep Dorothea occupied whilst Diese made his way privately to the King but it wasn’t what he thought it was going to be as Ray Dawn appears and murders him first.

Who knows. Who really knows.

I guess he does want peace or maybe his speech that he didn’t like Diese is more then just his last words to a dying fool who tried to take over the Empire.

It didn’t matter though because his first real part of the story was just him being super cool. His power looks terrifying and if he wanted to take over then he could with little to no effort and no need for mercenaries like Liscar.

I will have to rewatch the show again before the second season and try and get some of the Lore sorted in my head because I don’t see how Ray Dawn, one of the Seven Knights, was equal to someone like Diese but I’m sure when we were told about the Dukes they did say it was just such a info dump that I didn’t retain much of the information they dumped on me. Also if him and Nein are really Seven Knights why is she the director of Dorothea and not a Dukess? I guess there is no such thing but I’m too lazy to figure out what the nearest thing would be. Plus then there is Liscar who is one of them and just as powerful in his own way. Why is Ray Dawn seemingly more powerful and how did he end up just being a Duke and not in charge completely?

Honestly I feel I’ve said it a few times but the biggest shame when it comes to this series is that they never really bothered to expand on the interesting parts. Marlya and Free’s backstories tying in Wolfran and Veronica weren’t that interesting and neither was any of the Black Fairy Tome stuff but the world they are in, the war they’ve just come out of and the motivations of the politicians and people higher up then Dorothea is just so good that I kind of want more of that and less of most of the other stuff we’ve got.

Such a good ending to the season though.