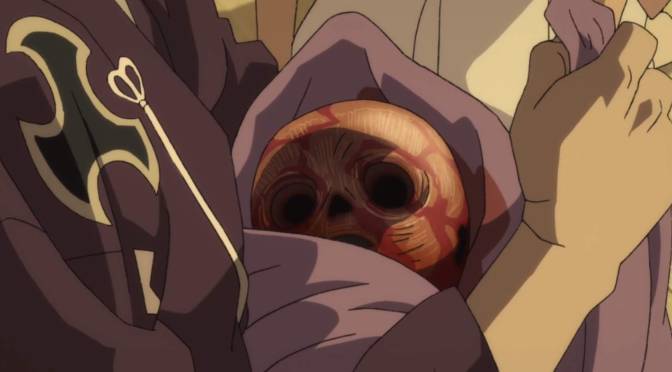 Another episode and another story. Who or what the Nue is I don’t know but we’ll find out.

So a Nue has the face of a monkey, legs of a tiger, body of a Tanuki and the front half of a snake for a tail. Though it also, as it does in this, have a body of a tiger which I guess is easier to depict.

Yes I wiki’d it. I mean we saw it but it was hard to explain just what it was other than to call it a Chimera which it kind of is. I only know that because Anna said it looked like a Chimera but it probably was the Japanese version of one.

This is again just one of those episodes that show us how messed up the world is.

Dice-Spot Saburota isn’t a bad guy at heart, he went through a lot and ended up tainted because of the world that he lived in and the pain he had to live through. It was a nice use of flashbacks to Saburota’s life to make this point once more.

That being said the Nue, Saburota and the story that this world is cruel and turns men into Demons isn’t what this episode was about.

Unfortunately this episode was the final blow to Hyakkimaru’s humanity.

I don’t think I really mentioned that his mum woke up and announced that actually after she destroyed the statue of Mercy that had given the 12 Demons her head instead of Hyakkimaru’s the pact with the Demons had been ended, it isn’t until now that we see what this means.

It was kind of truly sad though.

When the episode started there was this nice moment where we for the first time really saw Hyakkimaru hang out with Dororo, enjoy his company and want to actually learn and see the world through him. By the end of the episode Hyakkimaru had lost all thoughts of anything like that and was headed back to Diego to get his body.

In between that we had the fight with the Nue, the flashbacks and the thing that I guess really turned Hyakkimaru over the edge which was nearly losing Dororo because he didn’t have the body to help him out.

That was kind of the saddest part of the episode. Watching as Hyakkimaru tried his best to free Dororo from being having her arm trapped from under a rock and not being able to, nearly losing Dororo just for the Priest to show up and save her instead. It lead to him going crazy and killing the Nue but when no body part returned he had to go and face his destiny which was to face off against his father.

At this point there is nothing either side can do.

The Demons have broken their pact so Diego’s land is dying, Tahomaru thinks this is down to him failing to kill Hyakkimaru, I’m also happy to see Hyogo isn’t dead, but it really isn’t. Hyakkimaru now only has one place he needs to be to get back his body so that is it.

This is what the series will end with.

Hyakkimaru’s only goal is his body because it is his.

Dororo needs to find a reason to use his money.

I feel both their fates are going to be decided now.