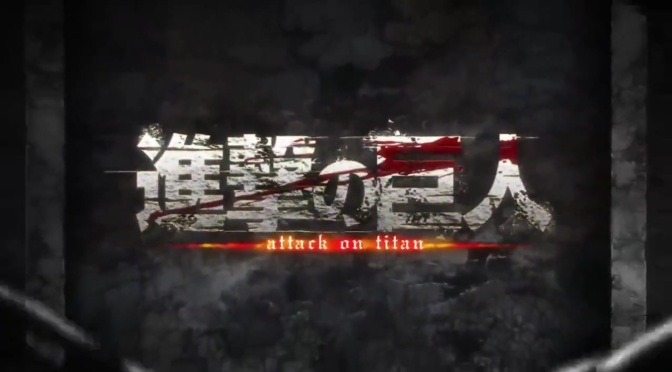 The battle is here, the enemy have shown up and it is time for the Scouts to fight the Beast, Armoured and Colossal Titans to win back Wall Maria.

It is a battle of brains which I guess you should always think that Attack on Titan is going to be. This time though they have no hot heads running around doing what they want as Eren has finally learnt and just does as he’s told.

What he’s told is to be bait, to keep Reiner busy so that he doesn’t kill the horses and basically start a siege.

Erwin is smart enough to see the formation that the Titans have set up on the outside and know that they are planning on killing the horses and forcing the Scouts to sit on the wall and starve to death, to do that he’s trying to keep the horses safe and to use Eren to bring Reiner away from the horses and into a place where he can be attacked by Hanji’s invention the Thunder Spears.

To be fair on Erwin it all goes according to plan and by the end of the episode it very much looks like Reiner has been killed, if not killed at least stopped completely.

How this is going to stop the Beast Titan’s plans we don’t know yet but it is a good blow for the Scouts.

I really like how we got to hear Erwin formulate his plan, people were starting to worry about how close Reiner was getting and that he was taking his time but at the end of the day he took his time and figured a way to think around the problem. Something that we are slowly watching Armin being capable of doing. He thought that one step ahead that it was a win/win situation for them even if they technically could have lost both outcomes. With Eren running Reiner would chase meaning he wouldn’t kill the horses this would leave Eren free to run around the wall and start a pincher attack on The Beast, as Reiner didn’t see that and thought that Eren would run to safety he went after Eren which meant that the attack on Reiner could instead begin.

Both plans could have failed but the one that worked out didn’t as far as the episode concluded.

Not only this but whilst Levi is incapable of seeing why he’s sent the Scouts to fight the smaller Titans I have a feeling that he sent them fully knowing that most of these Scouts have never faced a Titan and will struggle even with small ones that Levi finds easy to kill. They have much larger ones, smarter ones and weirder ones out there ready to attack and they need to have this practice and hopefully not die in the process.

He thinks of all the bases and covers them nicely.

Again it is why having a nicely balanced character grouping does. Levi is smart and can formulate decent battle plans but he is nowhere near on the level of Erwin or even Armin at this point. He is the muscle and whilst he has the smarts to lead some small details will always allude him. Then Hanji is the smart one but in a different way, she knows the Titans well enough to come up with ways to defeat them but not necessarily be able to form a total plan of attack. There isn’t really another character like her but in a way if we look at her, Levi and Erwin as a trio and Mikasa, Armin and Eren as a trio she’d be the Eren part where we NEED her but at the same time the world wouldn’t stop without her just… It would a little bit because the plot dictates that someone has to have the clever idea/be a Titan.

The only other thing I have to say about this episode is actually about the rest of the guys who trained with Eren.

I am so happy that when Hanji orders them basically to kill Reiner, even after all this time they hesitate. Of course Jean motivates them on because it is the right thing but it is so important to remember that these guys trained together, fought together and were a family. It doesn’t matter that these guys are now the bad guys it just matters that they once had a connection that can’t be broken. At the end of the day they might be doing the wrong thing in the eyes of these characters but there is a part of them that wishes probably that they could understand and come to a agreement and death to someone they once thought of as family is the final nail in the coffin that these guys just aren’t going to be reformed. Annie maybe at some point but these two never.

It was such a sad yet brilliant moment. Really stood out.