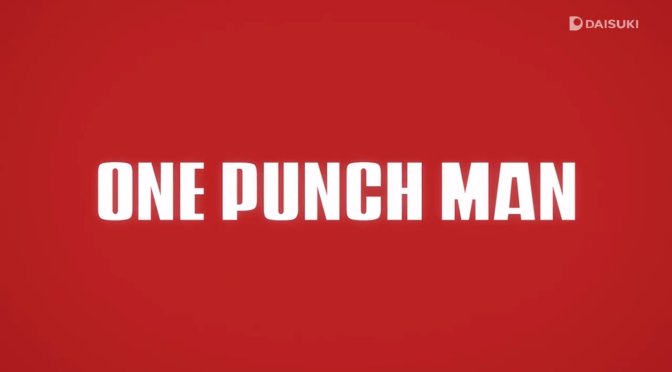 Garo is now the focus of everything, he is hunting the Heroes and taking them down one by one. It is only time before he comes across Saitama.

Again the beauty of the series is that they mix a really decent and dramatic story with the light hearted humour that surrounds Saitama.

I really hope that this isn’t the end for Garo, I doubt it is and that now he’s kind of faced off Saitama, a no named person that he doesn’t even know is a hero at this moment, that he’ll want to better himself to be able to beat him. I mean in this episode when they come face to face it was a case of accidental… Saitamaness that ended with Garo being karate chopped to the neck and being put out.

That is just OPM in a nutshell though.

You had this really cool story about Charanko being kicked out of the Dojo and wanting to put Garo down so that his master Bang didn’t feel so bad, he walked in on Mumen Rider and the Tank Tops coming face to face with Garo and a brutal and well animated fight scene commences. They build the drama and tension of the threat of Garo really well to the point that Bang brings in his older brother to help put him down but doesn’t come face-to-face with him YET. All episode long it builds and builds Garo until you actually think “jeez Saitama might have his hands full with this guy” just for…

With Saitama out shopping he takes him down in one chop.

That being said Garo also had no idea who Saitama was so didn’t use his actual attacks just brute strength which means that a fight between them two is obviously still going to happen and I believe it’ll be a interesting one when it comes. I think we’ll see Garo take on his former master first at least and probably Genos too, this has become a giant threat to the city and I can see a full on battle commencing.

Then again that isn’t the story that Saitama is following.

Which is great because it means that they can continue to build Garo and a potential proper showdown between the two whilst Saitama decides that he is going to be a Martial Artist.

He doesn’t know he’s already taken Garo out but he does know that Garo’s fighting style is going to be hard to defeat. Then again he’s also entering a Martial Arts tournament “dressed” as Charanko along with a ridiculous wig just to win the prize money.

It was such a good episode. The battles between Garo and the Tank Tops/Mumen Rider and Golden Ball and Spring Mustachio were great whilst at the same time I had tears in my eyes laughing at Saitama in the hospital offering people banana’s. It is why OPM is such a loved series because it puts both those elements together so well and yet even with his kind of defeat in this episode Garo feels like a threat that when he gets serious fighting Saitama later if this isn’t a terrible way of bringing his story to a end we all know Saitama is going to win but it’ll be fantastic to watch.

One thought on “One Punch Man Season 2 : The Hunt Begins”