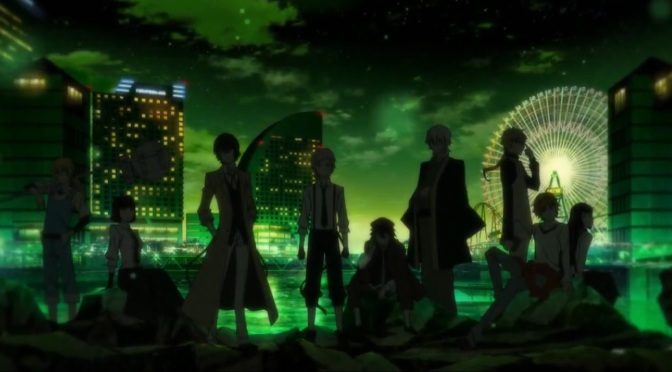 This really was a great episode for me. I loved the battle between Poe and Ranpo which was basically a rivalry between the two greatest minds. It makes me wish that we just got a series of them trying to better each other because it would be fun, their personalities were great together and the story itself was pretty interesting.

It was a shame that it felt a little rushed for me.

I get why they had to do it the way that they did it, with the reveal of what was going on being completely spoken by Ranpo instead of seen on screen after all I guess he just had to realise what was happening to be let out and not actually do anything after he had figured it out. The answer was also a bit over the top and whilst I really REALLY enjoyed it if it wasn’t so convoluted then we would have probably been able to see a proper detective story with a proper ending to the story.

We get onto the second half of the episode and they send Nakajima to the Moby Dick just to find out that the rest of the Guild have already left the ship having entered the last part of their plans.

Nakajima needs to move he Moby Dick away from the city but he’s going to have a whole load of problems with that even in a empty ship because Akutagawa is there and he doesn’t care what plans might be in place or obviously what might or might not be going on as long as he can make Dazai proud of him.

Just I don’t see why he thinks this is going to help.

In other words this episode could have been really good but what actually happened is that they rushed a really interesting story and very different ability because it was only there to give the Agency a upper hand against the Guild, then they wanted to set up a fight against three of the most powerful people in the show though… Then again everyone is stupidly powerful in this show.

What it actually did was make a pretty boring episode instead of a interesting one.

I loved the first half but it was horrible in the second which was very wordy and I lost complete interest in it.

They should have just stuck with Ranpo vs Poe which was really interesting and left the rest of it for the next episode because very little actually was achieved in the second half of the episode.