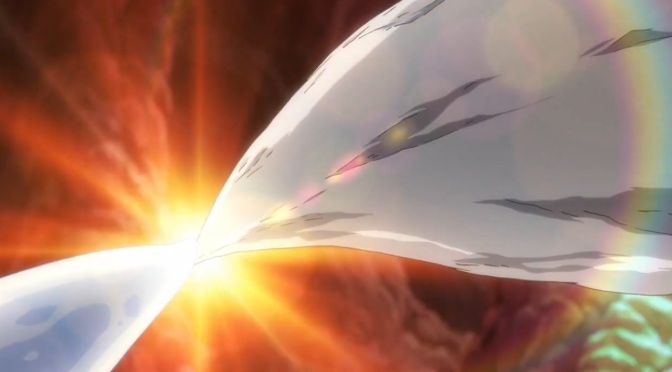 The older we get the grumpier me and Luc get and on a group chat watching this episode along with Amanda who doesn’t really watch anime we realised that maybe we’re just too old and grumpy for something like this?

Don’t get me wrong I still love the general story of Reincarnated as a Slime, I love Rimuru as a character and how he is taking advantage of having a second life by helping others and creating a country basically where everyone can live in peace together and find their worth.

I’ve even enjoyed the villains up to this point.

I like that it isn’t all black and white and that some of the bad guys actually have solid reasons for what they are doing and there is always something to learn from the opponent stood in front of you. Whilst a lot of it has felt rushed looking back on it whilst it has been a breathtaking adventure it has been full of great emotional moments, some strong character work and is just a lovely tale of friendship and basically how bringing people of all backgrounds together is always a good thing.

Then again I complained about the Elves when we first met them, I complained a little about when Shion evolved to basically be walking breasts for Rimuru to be cuddled under and I’m damn well old and grumpy enough to ask the question why the hell do the female Lizard Women turn into humans when the males turn into uglier Lizards?

Or why the hell we need a childish Demon Lord who basically wears long sleeves on a tank top with bikini bottoms?

I know the answer to that is just Japan but it really took me out of the episode and to be honest I’m not sure how long I can deal with a character like Milim before I just get grumpier and grumpier. To be fair I do turn 30 this year and as I’m a good 20 years older mentally then I am in reality that means I’m reaching the big 50 this year so can be grumpy. I feel like questioning how she doesn’t get cold walking around a forest village with no clothes on, I wonder why we shouldn’t be annoyed that a male slime that everyone seemingly wants to sleep with would be allowed into the bath with the female members of his village and more importantly I want to know why the fuck I should care about this show when it is obvious now that this is just some wet dream of Rimuru’s virgin boy persona.

EVERY female has to be attractive, one of his big lines about Milim is that she was “flat” when in actuality she was the most dangerous person he’s probably came up against so far. THEN she’s so childish she gives in and becomes his friend because he fed her honey.

We’re now meant to take LESSER Demon Lords seriously when we have Milim prancing around?

They had GREAT stories with characters before now and then we have Milim.

I know, I know… I can’t really complain about something that is prevalent in most anime and is just part of Japanese culture. We do grumble here and there more as a means to remind you all that it is something we don’t like about anime but this episode was one of those episodes that makes you wonder whether it is even worth bothering with the story any more because it is becoming more and more the fever sexual fantasy of a nerd over a story with any kind of interesting point to make.

THEY EVEN KIND OF RUINED GABIRU!

By having his sister turn up (and turn human because of course she fucking did, how could Rimuru have another pair of breasts to cuddle into if she was a Lizard) and be the serious part of the Lizard Men under Rimuru, his group being sent to the caves to cultivate plants and then him being the butt of every bloody joke by being stupid for the sake of it they have already stripped some of the interest in that character away.

He doesn’t get a cool upgrade.

He’s gone from maybe being the dark horse of the series with a interesting tale to tell and so much personal growth to being the jester of the piece.

He will forever, probably, be overshadowed by his sister who now joins the unofficial harem being built into this series because why not give Rimuru a harem?

Whilst I won’t be giving up on the series that easily this episode really made me feel like I shouldn’t bother. It wasn’t fun for me to watch, it pushed all the male characters to the side as more echo chambers for Rimuru’s thoughts and sometimes having a cool fight scene whilst the female characters get pushed more and more to the forefront just so we get more scenes like the bath scene. Whilst that might not continue, this might just be one of those episodes, some people… Some people will now fully give up on it. Luc has, he doesn’t care if it gets better. We can all say “well it just wasn’t the kind of story for you” but whilst that side of it has always been around there was always a underlying story that looked like it would take over the Rimuru is a virgin that has a thing for boobs stories and we’ve seen that so much recently.

If Gabiru continues to be the butt of everyone’s jokes in the next few episodes I might turn off myself.

2 thoughts on “That Time I Got Reincarnated As a Slime : Demon Lord Milim Attacks”