What happens in a world that starts making Robots for just about everything? Well Futurama showed us the way with good old Robot Santa.

Board up your windows and stuff your chimneys if you want to survive Christmas time in New New York.

I was asked to pick something to talk about this Christmas and instantly what went through my head was Futurama’s spin on Santa Claus with their murderous robot. Like everything in the future Fry is introduced to the way humans tried to make life easier and failed miserably.

Created to judge the naughty and nice but with standards so high that not only is everyone naughty they must be killed this murderous robot is a terror on Christmas Eve and has featured in 3 episodes and Bender’s Big Score.

Why did he pop into my head? Why is this what I want to speak about?

So I am the kind of person that thinks that Futurama is one of the under rated shows we’ve been privileged to have and in a way Robot Santa plays to that cynical part of me that really loves the show. People think they are entitled to presents and no matter what they do as long as they aren’t awful they are good enough for what Christmas promises. You can be old enough to know Santa isn’t real but if faced with a machine that has Santa’s will you’d think you would pass. When that went wrong you ended up with a genocidal robot wishing to wipe the naughty off the planet and instead of trying to be better people they just block his access to their house and change their habits of celebrating Christmas.

It is hilarious and even more funny because it really feels like what would happen in reality.

Something I always feel when it comes to Futurama.

Robot Santa himself is a tyrant that uses native Neptunians as basically slaves, they don’t get paid for anything because Santa never gives anything away. He is the complete opposite of Santa but at the same time… He is Santa.

No story of Santa ever really explains who the elves are and what he does to keep them healthy or make sure they have decent work standards, time off or anything else. They make toys all year round and now they’ll have to be making those iPhones and XBox’s too but there is never any indication if that IS something they do all year round or if it is made to order in short periods of time. We have no real information on Santa or how he is, how he knows who has been naughty or nice and what qualifies as naughty or nice.

Robot Santa isn’t some really out there idea or version of Santa it IS Santa just spinned in a different light. The light isn’t really even on him, you don’t truly know if Santa isn’t a tyrant all you know is that his standards are low enough that you get a present and depict him as a nice guy because you got your presents. He might be a evil, elf hating dick with no standards whatsoever. 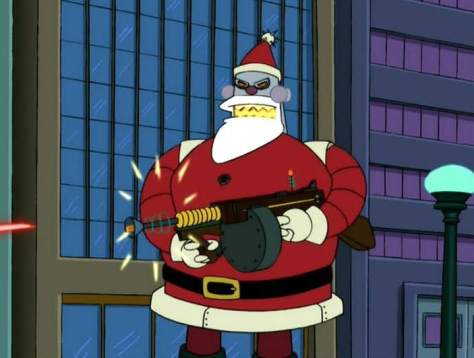