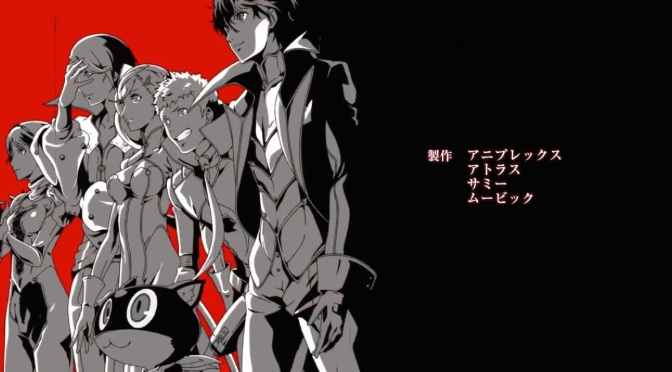 So we’ve moved on and now the Phantom Thieves themselves are being attacked. First by a group called Medjed and then by a hacker called Alibaba. How will they cope?

It was actually really interesting and this one case might be the only other one bar Kamoshida that I enjoy.

So Medjed I don’t think really are that important right now, most of the things happening in the episode seem to be done by Alibaba who MIGHT be the Boss’s daughter? I’m sure we’ve seen her before in episodes watching over the group from a computer so she’s obviously a very skilled hacker and we’ll have to see where that all goes in the next episode.

Pretty cool introduction to her though and as she’s the subject to the heart change but Makoto thinks she’s the one ASKING for the change of heart as well it could be the next member of the group. I kind of like the idea of having a hacker, when making up Makoto’s nickname she said something about not being the mastermind and a hacker would be the perfect person to be a mastermind so it’ll be a interesting addition. Not only that but if she’s the one asking for her own heart to be changed and therefore ends up being the next member of the group then it’ll be a completely new way of seeing someone open their Persona.

This episode was kinda of a thriller in a way thanks to her being a hacker too.

All the phones going off in the classroom all at once, the light being turned off in Shibuya and of course the messages that Ren couldn’t reply back to.

By the end of the episode we even had a thunder storm and the group creeping into the Boss’s house to find his daughter just for the lights to turn off and her and Makoto coming… Kind of face to face with each other and scaring the shit out of each other. Not sure why she’d be creeped out or why no one other then Makoto turned around, it was a funny moment but I get what it was meant to do.

Actually looking forward to where this leads, specially as I like the Boss a whole lot and we should get to know him better through it all. Finally it is starting to look promising!