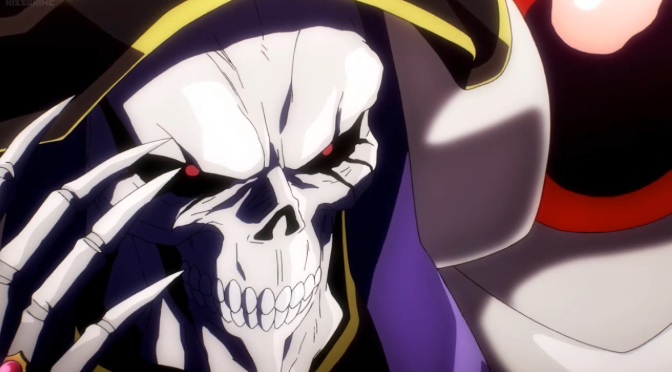 It’s been a bit of a mixed bag this season with a weak start and what felt like a slightly rushed yet action packed end.

Overlord II finishes but what will be the outcome of Ainz and Demiurge’s plans.

It’s much of what we said to be honest. Demiurge is doing it for a few reasons they get some slaves, their notoriety grows, they can hide their help in taking down Eight Arms and they get some spoils too. Not sure if I should be surprised with the fact that Demiurge figured all this out and Ainz couldn’t even come up with one actual merit to this plan, its a outstanding plan that puts Lord Momon in a great position whilst helping Nazarick no end.

Dramatic way to end the season but again I can’t help but wish that they’d taken even just one episode away from the Lizard Men story and given it to this one because I felt like the actual battles around the Ainz/Demiurge battle would have been interesting to see. As it was we got to see a super cool Eater thing which was easily killed once by Momon and then by Stronoff. In fact the only real fighting we saw ended with Momon taking out a whole bunch of demons then Stronoff and the King marching into battle. It would have been nice to SEE that battle, to see what the King did, to see Stronoff at work but instead it just showed they were way too strong and was just a glimpse of something that could have been so cool.

Brain came face-to-face with Shalltear but it looks like her orders were to not hurt Climb, she seemed to see Climb when going to attack Brain and disappear so if he is the one that she was told to leave alone I do wonder what importance he has in general, he also didn’t get hurt though we didn’t get to see the true reaction of the Princess that her beloved didn’t come back a cripple and therefore couldn’t stop her from tying him up and making him her sex slave.

So many cool things happened but because it felt like they ran out of episodes a lot of this cool stuff was rushed.

Evileye fighting two of the maids and Ainz/Demiurge talking were perfect for the final episode but there was no real build up to it with the fighting up until that point.

Saying that I did binge watch the first season and half of this season and it very much feels like a show that needs to be seen over all its seasons. Even this ending was much more a “well we might be away for a while but this is the next story”, it left you waiting for season three with baited breath.

So whilst it felt rushed it was a brilliant episode and it’ll be interesting to see where it all goes next.