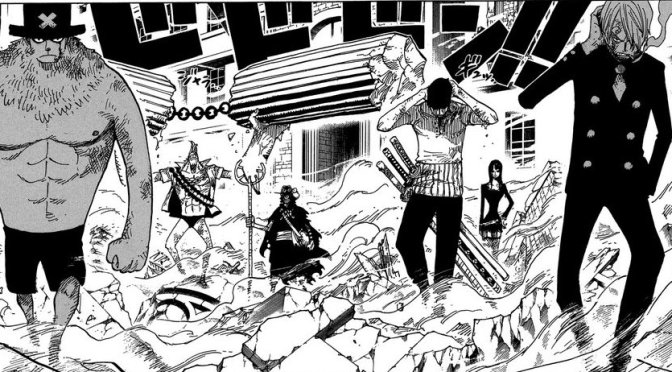 The team is assembled all there is to it now is to finalise the plot.

Actually I was a little disappointed with the plot. I don’t know but I thought it would be a lot cooler then it was. Maybe I just came up with too many random and illogical assassination plots for Big Mom but I don’t see this one working.

Luffy is the diversion, when Pudding goes to attack Sanji he’s got to make his entrance and destroy a picture that Big Mom holds dear to her. Apparently when someone knocked it over before she fell to her knees and that is the only time anyone has ever seen her injured.

When she’s vulnerable Bege will shoot her with a poison missile of some sort.

After that Caesar, who can fly, will be everyone’s escape using Brulee and the mirror world.

When its all said and done, and baring in mind Bege thinks it’ll be over in 10 seconds, they all return to what they were doing and that is that.

I love that there is a clear goal and then the alliance is off and they are back to being enemies. It isn’t like Law’s which is going to be ongoing and probably see his crew and Luffy’s work together for most of the rest of the story of One Piece, I don’t see Law really caring enough about being Pirate King to want to take that from Luffy after working with him so much, Luffy helped him do what he wanted to do and I can see his crew becoming allied for good with the Straw Hats.

I never saw that happening with Bege but Luffy can be strange. Its good to see Bege will probably have no second thoughts about Luffy and will go back to his own plan as soon as its over.

For everything that has to happen to happen, for the story of Sanji to have any kind of closure all of that can’t happen in 10 seconds. There NEEDS to be a element of closure and whilst Luffy thinks he can save the world in 10 seconds I don’t think he can.

All I can think of is that Luffy will save the Vinsmokes, we’ve already seen their underlings aren’t allowed in the wedding, take them back to their floating country and THEN have some sort of closure on this chapter of Sanji’s life but you still will have a lot of angry people on your heels.

Will Big Mom really let her guard down enough to be attacked and assassinated just like that?

I do think Bege is overlooking that there might be more allies then enemies in the group at the Tea Party as well, I feel that it isn’t going to go to plan, well it ain’t is it? But I feel its going to be a much grander fall of power from Big Mom then just being assassinated.

Its still Pudding though for me. That end speech by her about how she’s going to have to erase everyone’s memories so that she’s still the good girl in their eyes. Would it really matter at that point? Big Mom will be so powerful who cares if Pudding is a murderer? She tested out the gun on Reiji and we know that gun is meant to be able to go through iron skin as it were, we’re reminded time and again that Big Mom’s skin is like iron so Pudding has the weapon to attack and the means to make herself all powerful afterwards by editing everyone’s memories.

She is absolutely the perfect assassin.

Without her being a good guy I can see her letting Sanji and the Straw Hats go too. After all their distraction at the wedding will probably be her big opening, she might have a plan that is risky but worth it and with them meddling she might be able to kill her mother in a better way. Whilst I see her having a evil streak in her I wouldn’t put it past her thinking that it would be sporting to let them go and hunt them herself or even for her not to be interested in being a Pirate but just taking over Totland and having it all for herself.

Right now I feel her plan might be to kill Sanji, let the plot to kill the Germa go down then shoot Big Mom when she’s got her back to her. That is if she’s planning on killing her.

I just don’t see a reason why someone who is as self absorbed as Pudding seems to be would care for Big Mom at all. Her power is hers and hers alone and I can see her being fed of of Big Mom thinking it makes her special when it makes Pudding and Pudding alone special. Honestly just can’t see Bege’s plot going down at all and really feel Pudding is the key to the demise of Big Mom.

One thing is for sure though…

Can not WAIT to see Luffy’s entrance!