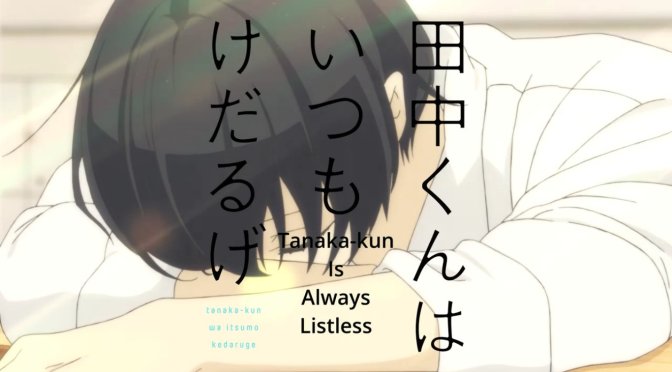 We get to make a new friend, that friend being the most popular girl in Tanaka’s class, the class representative Shiraishi.

I like that Tanaka and his listlessness attracts just about anyone. He’s harmless and lovely and no one would feel uncomfortable in his OR Ohta’s presence.

When running late Ohta nearly runs into Shiraishi. She drops her paperwork on the floor and after saving them from her bodyguards Ohta and Tanaka decide to lend her a hand in replacing the handouts that she dropped.

I loved seeing Tanaka actually attempt work it was nice but the best part was that it just gave some time to develop Ohta on his own. Not that he’d been left out of being developed but he just got to do some silly things of his own. He loved Shiraishi’s macaron’s to the point that it was about the only thing he could think about when him and Tanaka left.

I’m so sorry to her I hope she doesn’t mind me telling everyone.

She thinks she’s a dweeb. I mean the way she put her hair up after Ohta left was dweeby I guess but having to wear glasses is not dweeby in the least. I don’t know why she’d think that. I loved that Ohta walked back in and saw her and then she panicked the next day following them around to make sure they didn’t tell anyone just for Ohta to have not realised it was her and telling everyone that someone else had been in there when he went back.

Possibly the best moment so far was Tanaka’s reason for recognising her when she tried to experiment with just being herself and walking around the school. She thinks there is a deep meaning to it but in actuality he just recognised her chest. That was funny. Though it came after the sweet moment of Ohta and Tanaka trying to motivate her to not give up. It was a strange speech with Tanaka telling her he was scum because he was lazy and that she did a good job of being productive AND pretty. The sentiment (or seductiveness I guess) of it all was felt though.

I really liked Shiraishi. Its kinda obvious in her own way she’s going to be a “love interest” of sorts and I thought I wouldn’t like that (my favourite line being Tanaka’s about Ohta being his ideal wife because he can carry him) but Shiraishi IS just a lovely character and you just find it kinda cute that she obviously likes Tanaka, though maybe those feelings rose from a strange place seeing she thinks he’s seen through her when in actual fact he’s just a perv.

To be honest though I kinda missed Miyano. Say what you will about her but her eagerness to be listless is cute.