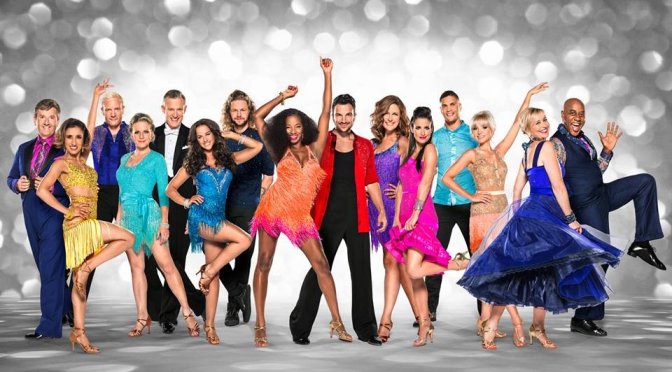 So here we are again, all the glitter, fake tan and sequins. We are on our official countdown to Christmas, for us it isn’t the coke commercial’s with the Coca Cola van coming into view that marks the holiday season its just how orange you can make a bunch of celebrities look whilst outside its getting colder and wetter!

It can only be Strictly time!

(For anyone unaware of our failed attempt to keep this blog last year, me and Anna have decided to collaborate on a more humour related blog full of fan girling, talk about Tristan’s tongue and fainting at the Heart Throb that is Kevin Clifton. Please do not take anything below too seriously as it is all just a bit of fun!)

So how can you tell that Strictly is back? Well from now until forever, or at least until Gleb explodes from his own good looks, you know Strictly is back because someone will be telling you how attractive Gleb is.

Thank you Claudia. Thank you.

Well it is either that or the fact that the judges have been wheeled out of the crypts the BBC keep them in and told that it would be a good idea for Darcey to “smoulder” at the cameras and Bruno and Craig to twirl like two over enthusiastic spin tops towards the judges table.

Is it truly a good idea to have Claudia accompanied down the stairs by Anton? Or is this a gentle reminder to Tess that if he wins this year then this man right here might be taking her job? By a stroke of luck Claudia and Anton even seemed to be wearing matching outfits. This could end badly for Tess.

Then again we have to be happy that Gleb was not accompanying Claudia down the stairs, for his own mental and physical safety then for ours. That woman might just combust if he so much as looks at her.

With all that said it is time to meet the “Stars of the Show”, indeed we must meet our celebrity Professionals with their hapless pray beside them…

Stick the Glitterball in this man’s hands right now. If you couldn’t tell just how badly the judges seem to want him to win already in the first show back then you’ll soon learn. We are reminded just why we love Kevin, the many MANY reasons we love our Kev from Grimsby. For this blog that list reaches the grand total of 0 reasons but its nice of the BBC to remind us anyway!

They danced their Tango in a 1960s theme. I’m surprised the temptation to make Kevin a full blow Austin Powers was just too much for the BBC but at least we’ve put off having to see Kev’s wonderful Tango face this year as it was the most cheerful and happy Tango I’ve seen in my life!

Kellie managed to be as good as everyone thought she would be, though whether that is because she danced as Kellie or Mimi is yet to be established. (If the “theme” of the dance annoyed you watch it without the music on, she actually looks really good!)

Either way the judges loved it which means there is a obvious call now for Tango’s lacking drama, passion and attack. Stick a cheesy grin on your mug and dance all Groovy like and you might just garner a point or two for “daring” choreography!

So how happy are we with Kellie’s Tango?

We give it Four/Five Happy Kev faces!!! In all honestly it was a great dance we just didn’t like the theme!

We have dubbed this couple Team Fierce! Don’t ask why, we’re not too sure but it was the first word to pop into our head whilst watching their VT, in the best possible way.

Something seems to be wrong with Anthony but the BBC is determined to hide it from us. Maybe he hurt his foot or something? Whatever it is I’m sure we’ll hear about it one day.

In fact we do! It was actually his arm! Who would have thought?

Our brand new Pro and her one armed boxer make a great impression! Otlile Mabusa shows that she’s worth a place in the line up by choreographing a Jive that shows off 101 ways to not move your arm.

Thankfully she’s also taught Anthony 101 ways to move his feet, something he needs to work on slightly more then the not moving his arm. The man danced out of his trousers though so who are we to complain!?

Oti shows the power of her clever choreography and could also fight the mighty Glebpocalypse for the title of the most beautiful new Pro this year. Can we keep her? Is she even really here? Lets keep her OK BBC?

How do we feel about the One Armed Jive?

Four ripped pants and a beautiful Flower Queen / Five! That’s how much.
(We also apologise for only being able to get four photos on one line but come off it we won’t have many 5/5s anyway!)

At first you may look at how elegantly Helen and Mr Manrara stroll onto set and think “they are certainly on the wrong show, ITV’s Downton Abbey is that way” but then you remember that Mr Manrara won’t be allowed to stroll causally anywhere with anyone but Janette in fear of her blowing our Twitter feeds to death with reminders of how in love they are.

So Helen looks like she just strolled in and picked up the nearest dancer she could for a quick Waltz before tea!

Everything about Helen just shines from her smile to her dazzling dress. Everything about her and her Waltz just OOZED with Elegance, Romance and Charm. Thus they were named Team Elegance.

Of course dancing with Aljaz just made her even more Elegant and sparkly!

As much as I loved it, and I did, and as much as I cried, ugly UGLY tears, I do have to wonder why the male professionals think the BBC can’t clean the floor or why they have to use such pretty dresses to clean the floor with? It makes no sense twirling them on their bum on the floor. What a waste of a beautiful dress.

Of course Helen also is unique in that she’s the first celebrity nearly brought to tears by Darcey. Oh no Darcey hasn’t shaken her “I’m too nice for this world” act she’s Helen’s hero! Anna even kindly screencapped the reaction leading up to I believe the moment all emotions died inside Helen of absolute happiness.

We were fully behind you Helen! You really were beautiful. So therefore we reward you with :

Five Duck Feet out of Five!

Carol & Pasha
Dancing a ChaCha in a shower of Pashas

I’d like to be able to say here comes the RINGUH of the season. I’d love to say Pasha will be back to back Strictly Champion….

She looked beautiful in her dress but that is as far as the compliments go. Of course I wouldn’t want to be caught in a hail of Pasha either so I don’t blame her for looking more like she was running for cover then dancing!

We like Carol but she was the first person to make Craig do this face …..

It isn’t all bad though! She was DANCING. She was just doing all the wrong moves, in all the wrong places, in the wrong order, with the wrong feet, dancing a different dance completely.

Actually no. We understand Carol One OMG face out of five.

When we first heard that Daniel O’Donnell was doing Strictly there was a communal cheer of “FINALLY!! A cure for our insomnia is coming on the lead up to Christmas!”

Unfortunately we were very VERY wrong as we managed to fall in love with a corny old Irish singer in one brief VT! Thus Team Excitable was born.

Mr Excitable is the biggest surprise of the century! Though I feel like it might be a one off, the Waltz being more suited to Mr O’Donnell, what a first dance for him!

Kristina as always gyrated and wiggled her way masterfully around the dance floor but this time she didn’t need to drag anyone with her as Daniel gracefully followed in such a charming little Waltz.

Its a shame he didn’t sing along! He could teach those singers a thing or two!

We give Mr Excitable himself…

I think that is the closest we’re getting!

Anita and Gleb
Dancing a ChaCha in the Glebpoclypse

So we’ve decided seeing how

is so well loved and how

is so beautiful and we need to be reminded of

beauty every 10 seconds we’d just replace his name (so

) with a picture of him so that everyone can die a little more in this Glebpoclypse that we’re having.

We’ve been told how beautiful

is but not many people remember who

is dancing with. Of course its the lovely Anita!

And lovely is just what she is! One member of the forum had a fanny attack about stairs but that didn’t last long and whilst we don’t share the worlds obsession with

(but we don’t mind killing off

photos, you are welcome) we WILL share the worlds obsession with Anita and her dancing! Though keep her away from stairs for a while.

Anita gets the special…

4 randomly pixelated cows in the Strictly Ballroom outta Five!
(We promise never to do that again!)

And that was it for Show One. By this time the Leader Board looked like this :

Mainly because there are NINE more couples to go we are splitting the first couple blogs into two keeping six in one and the remaining (Nine, then Eight, then Seven and so on) in another blog.

We will also hopefully have a Friday blog which will have such wonderful updates to the world as Tristan’s Tongue watch (that is still a thing) and the Hunk Off as well as talking about who is dancing to what and our feelings on that weeks ITT (as long as we see it!)

So within the next 24 hours look out for more Strictly Craziness!