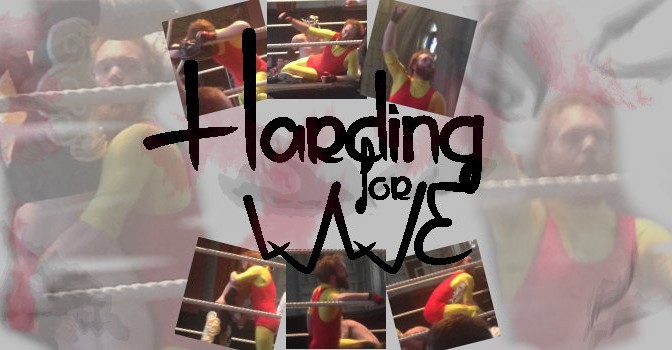 OK so let me bore you to death for two seconds.

As you all know in April I went to a local wrestling event, enjoyed myself immensely and vowed to go to more wrestling events whenever I hear of them. Well we’re working on that but it can’t be helped.

One of the wrestlers at the show has started a campaign to get himself, not necessarily to WWE but just to be noticed. Wrestling is his dream and now he wants to go on to bigger and better things. As a local guy (for me and @gmlucius anyway) we’ve decided to support him on his journey and do whatever tiny bit we can to help. We know it ain’t much but we wanted to show our support. This of course means that hopefully one or the other of us will get off our backsides and hopefully go see him live as much as we can and as well as reviewing the events bring him closer to all our readers hearts as well.

I saw him back in April and he is amazing in the ring, yeah I’m easily impressed but this guy has everything he needs to make it wherever he wants to go. His match was one of the highlights of the evening.

The banner is terrible and I apologise, I’ve only got photos from one event and limited brain power, but it’ll do for now.

For people who have seen John wrestle and want to get behind him we’d love you to share your stories or photos and we’ll be creating a special #HardingForWWE area in the Wrestling category.

It isn’t much, it isn’t going to help him one jot, but anything to help a local guy we’ve decided we’ll at least attempt to do.

Me and Lucius will attempt to get to events, get some actual decent photos of our own and then to generally harp on about it every now and again.

For now you can follow him all over social media :

As we said. It ain’t going to do anything other then annoy our regulars from time to time but if we can even get one more person aware of John and his attempts to get further in Wrestling then we’ve done our jobs.

I promise before too long I will make a better banner too…. Honestly I am ashamed at myself but meh.

Good luck Rocker! We’re all behind you here at Believe in Geek!

One thought on “#HardingForWWE Campaign”